from the American Thinker of January 11th

The National Emergencies Act of 1976 provides the statutory basis for a president to declare a national emergency. The law requires that the president identify the provisions that allow him to exercise the power:

SEC. 301. When the President declares a national emergency, no powers or authorities made available by statute for use in the event of an emergency shall be exercised unless and until the President specifies the provisions of law under which he proposes that he, or other officers will act. Such specification may be made either in the declaration of a national emergency, or by one or more contemporaneous or subsequent Executive orders published in the Federal Register and transmitted to the Congress.

This means that the president must identify the statute that allows him to do what he wants to do, which in this case means using money from the defense budget to build the wall. 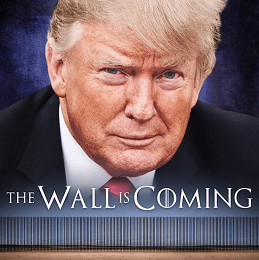 If Congress disagrees, it can pass a joint resolution, but the president can veto it, and then Congress will have to override the veto. The law provides the mechanism for Congress to challenge the declaration of an emergency. This means that the plain language of the law leaves it to the president and Congress, the elected political branches of government, to determine a national emergency. It means that it is not an issue for the federal courts, because the statute has a clearly written procedure for the elected branches of government to resolve any dispute about whether the president is properly following the National Emergencies Act.

There is a dispute about whether President Trump can use defense funds to build the wall. Professor Robert Chesney, University of Texas Law School, has written a convincing article that the president has the power under two statutes to use defense funds that have not yet been obligated if there is a declaration of war or a national emergency. This means that the plain language of the two statutes refers to the use of such funds if there is a national emergency.

Ackerman’s view is clouded by his politics, which is evident when he refers to President Trump as follows:

What this all adds up to is a potential crisis much graver than whatever immigration emergencies the president has in mind: A legally ignorant president forcing our troops to choose between his commands and the rule of law in a petty political struggle over a domestic political question.

It is not unusual for law professors, lawyers, and politicians to disagree about the meaning and application of a law. But when the disagreement is based on how you feel and think about the president who is invoking the law, then the opinion is based not on reason and logic, but on the emotions of the persons opposing the president.

Opponents of President Trump’s potential declaration of an emergency cite President Truman’s seizure of the steel mills, referred to as the Youngstown Sheet and Tube case, during the Korean War, when the unions threatened to strike. The seizure was held unconstitutional because there was no congressional authority for the seizure. The seizure violated the separation of powers doctrine, and the president could not apply the war powers to domestic policies. Simply stated, there was no law that allowed the president to seize a private company in a labor dispute with a labor union.

The Youngstown case can be distinguished because the 1976 National Emergencies Act now gives the president the statutory power to declare an emergency and sets forth the procedure for Congress to challenge the president. Moreover, the Court in Youngstown may have been influenced by Truman sending troops to Korea based a United Nations resolution, not a United States declaration of war, and now Truman was seizing the steel mills in anticipation of a labor strike.

President Trump clearly stated in his January 8 speech the factual basis for declaring a national emergency: drug-smuggling, which results in thousands of overdose deaths of Americans; serious violent crime by illegals against Americans; and the high cost of welfare and medical care for illegals.

Speaker Nancy Pelosi and Minority Leader Chuck Schumer will not agree to funding for building a wall or fence or any other physical barrier. Pelosi thought it was funny for her to offer one dollar for the wall.

We elected our president and Congress to deal with these issues. Declare a national emergency. Time for them to act.