Back on October 7th, Theresa May boasted of how Brexit will enable the UK to be more selective in what kind of and how many immigrants it takes in. Yet, now, it appears that the UK will sign onto the UN Global Migration Pact in December, making migration to anywhere by anyone a “human right.” In other words, the third world will have the right to turn the first world into the third world.

Voice of Europe (h/t Maurice) The UN Migration Pact has surely caused an international uproar. Countries choosing not to sign it having confirmed, or indicating they won’t sign, are Australia, Poland, Israel, Slovakia, Switzerland, Austria, Hungary, the Czech Republic, Bulgaria, and Croatia, all following the United States’ lead in withdrawing, with Belgium, Italy, and Japan likely to follow suit.

The pact seeks to normalize mass, illegal immigration forever under the auspices of the UN. 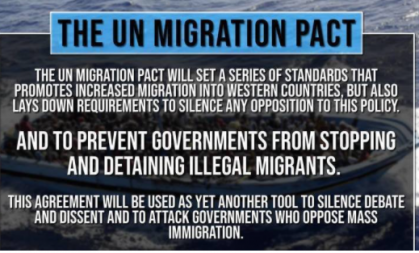 This would lead one to believe that Britain’s ruling Conservative Party, having made pledgesto reduce immigration “from the hundreds of thousands to the tens of thousands” in the 2010, 2015, and 2017 general election manifestos, would be on that list.

There are very good reasons to conclude that the UK will indeed sign the UN Migration Compact as there has been no discussion on the approval of it by the government in July this year. Perhaps this is to avoid a crisis such as was in Belgium, yet it seems it has been silently agreed upon.

Vice-chairman of Migration Watch UK, Alp Mehmet, has said of the pact:

“The Compact appears to have been drafted by diplomats whose aim seems to be to ‘normalise’ mass immigration from the developing world to the West at a time when the public are very clear that they find the scale and pace of such flows to be unsustainable and unacceptable.”

In September, President Trump said from the UN New York headquarters that “Migration should not be governed by an international body unaccountable to our own citizens. “Ultimately, the only long-term solution to the migration crisis is to help people build more hopeful futures in their home countries: make their countries great again.”