Ed.  The size of the throng surrounding the courthouse in which Tommy Robinson was convicted of reporting the truth reveals how much support this lone conservative has in Britain.  (Picture above)

The following article appeared in Gateway Pundit on October 21st

Tommy Robinson could be sentenced to more prison time on Tuesday, when a judge rehears his contempt of court case.

Robinson has now fired his legal team, as they were pushing for him to plead guilty in exchange for avoiding returning to prison. The 35-year-old independent journalist and activist told The Sunday Times, “I’d rather go to jail for the next 25 years than accept guilt for telling the truth.” 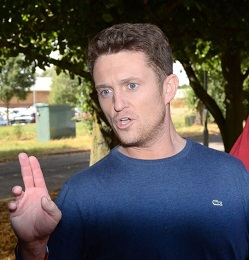 In May, Robinson was arrested for contempt of court while filming outside a Pakistani grooming gang trial in Leeds, as the case was under a reporting ban. In August, the charge was struck down by Lord Chief Justice Burnett and two other judges — but he will now be subjected to a retrial.

Robinson’s reporting is heavily focused on Islamic extremism and his imprisonment stemmed from an arrest last year, also for contempt of court, when he was trying to film Muslims who were on trial for another grooming gang in Canterbury.

The arrest and same-day imprisonment of Robinson lead to thousands of people going out in the streets to protest.

Robinson was imprisoned from May until August. During his detention, he lost over 40 pounds due to concerns about the inmates preparing his meals. He repeatedly complained to the prison and requested that they raise the £12 per week commissary spending limit so that he could purchase more packaged food, but they would not allow him to.

Speaking to Ezra Levant of Rebel Media, Robinson explained how after he was moved to a majority Muslim prison he had to stay inside his cell with the windows shut because people would spit or throw feces through his window.

Since he is such an outspoken critic of Islam, he had to be kept in solitary confinement for his safety. Robinson believes that he was deliberately moved to a prison with a high Muslim population to mess with him.

“If he were to have stayed in prison much longer, I fear his very life would have been in danger,” Levant wrote.

Additionally, he was only allowed to see his wife and children twice, for one hour each time. At one point, he was told by an inmate that his family was going to be attacked with acid.

Immediately following the independent journalist’s arrest and rapid imprisonment, articles about the incident were quickly scrubbed from the internet due to the British government putting a gag order in place banning any reporting on the matter. The gag was ultimately lifted after being challenged by media in the U.K.

The Gateway Pundit will be at the trial covering the judge’s decision and any protest or rallies that take place, thanks to a generous effort from Rebel Media to crowdfund more fair reporters in the courtroom.

Those who wish to help cover the expenses can do so here.